Check out my official site! You can also email me from here.

My adventure on the Blogosphere began in December 2008 when I set up a blog to chart my journey to publication called 'From Brain to Bookshelf'. The blog has been a great success and has taken on a life of its own becoming an informal community for writers, readers and bloggers alike. It is the 'brain' or 'brainstorm' end of the idea and I felt the need for a Bookshelf end - a place for my published work to hang out and be read and commented on. Rather than force my other blog to become civilised, I set up a new blog that is just for my writing. This is it.

Please feel free to comment on my work. All comments are emailed to me automatically and are manually uploaded by me so you won't see your words immediately.

If you would like to sneak a peek behind the writing scenes, my diary is online (yes I am that brave/daft) The Diary of a Cotswold Novelist

Agents and Publishers: If you would like to email me, use the comment function but type 'private email' before your comment so I know not to publish it. If you prefer, you can email me using the form on my site: http://www.rebeccawoodhead.com/

I hope you enjoy the blog.

From Brain to Bookshelf

the layabout living room of discussion that is my other blog. 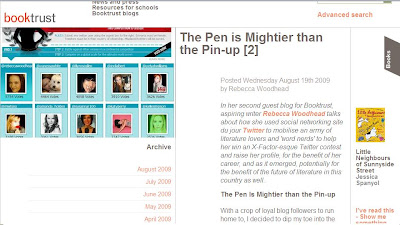 The Pen is Mightier than the Pin-Up
In her second guest blog for Booktrust, aspiring writerRebecca Woodhead talks about how she used social networking site du jour Twitter to mobilise an army of literature lovers and 'word nerds' to help her win an X-Factor-esque Twitter contest and raise her profile, for the benefit of her career, and as it emerged, potentially for the benefit of the future of literature in this country as well.

The pen is mightier than the pin-up

With a crop of loyal blog followers to run home to, I decided to dip my toe into the world of Twitter. When I was at university, I had lucked out in the most spectacular way and interviewed Stephen Fry. That couple of hours: the pizza; the chat, and the ‘pinch me, I’m dreaming’ wonder of it all is a gilded memory. I knew it was pathetic but I tapped in my name, surfed to his Twitter page and hit ‘follow.’ Almost immediately, he followed back. Now what?
It seemed likely that Twitter could be used for more than sending direct messages to Stephen Fry. Maybe there was even a literary application. In my bio I wrote ‘word nerd’ as a kind of bait for readers, writers, publishers and other delicious lovers of books. It worked. #Followfriday confetti floated through the air and life was a giant treacle sponge of sweetness. Rather than settle into this smug twittery pudding of success, I decided to view it as a launch pad. Being chummy with publishers on Twitter was not, I decided, the pudding but rather the amuse-bouche of the bookish Twitter experience.
In online book-deal mythology it is foretold that upon the magical follower number of ‘1000’ a three book deal will appear. The journey towards the magical 1000 is called ‘building a platform.’ My platform was not yet built. I grabbed a helmet and some scaffolding poles and drew up some plans. The construction site was the Ms Twitter UK Competition: a kind of ‘X Factor with avatars’ but you compete against celebrities as well as ‘normal’ people.
In my batch was Web 2.0 darling, Lily Allen. It would be a tough race. As I had no celebrity credentials of my own to fall back on (pizza with Fry only takes one so far) I came up with the idea of ‘literary stand-up.’ In return for votes, I wrote haiku and six word stories against the clock. Later, timed medieval translations were also thrown into the mix. It was exhausting. Writers, publishers, librarians and all kinds of ‘word nerds’ supported my Ms Twitter bid. They became known as The Word Nerd Army. We even had a slogan: ‘the pen is mightier than the pin-up.’ We talked about literary ideas and these ideas grew into the issues that our campaign stood for. In the final moments of the contest, we all agreed on the eleven issues that we wanted to start wider discussions about, and I promised I would use Ms Twitter publicity to do just that.
As the only non-celebrity in the final, and as the only 30-something on the top line, I was shocked to scoop the top prize. With a lead of 1291 votes as I crossed the line, it felt like a victory for literature over liposuction. The eleven issues – from literacy to libraries to the importance of choice for girls – now have their own blog:http://WordNerdArmy.blogspot.com
When I entered the competition, it was a platform building exercise but by the end of it I was far more concerned about the issues that mattered to the people on the platform I built. The market may be unstable, the future of the printed book may be uncertain but this experience has shown me that the core of the creation and consumption of stories – ‘word nerds’ – is stronger and more determined than I could ever have imagined. Whatever the recession delivers, the future of words and stories is in safe hands.
Rebecca Woodhead
Posted by Rebecca Woodhead at 03:25

Labels: Booktrust, The Pen is Mightier than the Pin-Up

Welcome to my blog and please feel free to comment on my writing. If you want to talk about anything a bit off topic, you are welcome to post it on my other blog, which is populated by writers, artists and general creative types. I'm on twitter, facebook etc too. Everywhere is linked to from http://rebeccawoodhead.com

Don't be shy about commenting here though, I love reading your comments.

If you'd like to email me, remember to write 'private email' before your comment so I know not to publish it.